Welcome to my Concert Hall :)

note: the song in the background will change with each update!

Here you will find many bands/artists including but not limited to...

My favorite genres are...

essentially, this is like a musical diary of sorts,, or at least some sort of documentation of what I listen to or what I'm inspired by. If i ever make music myself, I'll post it here. Stay tuned as always! My spotify account is earthlingplant iirc.

I also have a 'rate your music' account with the user name, you guessed it, earthlingplant. I dont really 'rate' things despite what the site may imply. to put it kinda crudely, I just enjoy music for music sake and will most likely use that as a way to document what im listening to/will listen to/have listened to and such.

Been a while huh. I guess so. I've been busy with art, choral performances, and archiving old CD-ROMs in the dark chamber I call a bedroom, I guess. I say "i guess" way too much. Gotta fix that. Anywho, as previously and briefly stated, I haven't written here in a while... but I can definitely assure whoever's reading this that I still listen to music!!! yahoo!!! rejoice!!! In fact I've been utilizing my dash phone mount for the past couple of months so I can properly listen to music while driving around. Now the entire 3 meters of town will know my music taste, which is more of a haunting thought now that I'm typing this up. UCHOTEN! Uchoten (which can mean 'ecstasy' or can refer to the Buddhist term for the highest form of heaven which is set on top of the 25 forms of existence) is our subject today, but specifically their 1986 album: "Peace". I'll kinda briefly discuss their other stuff (at least what I've listened to so far?) towards the end. 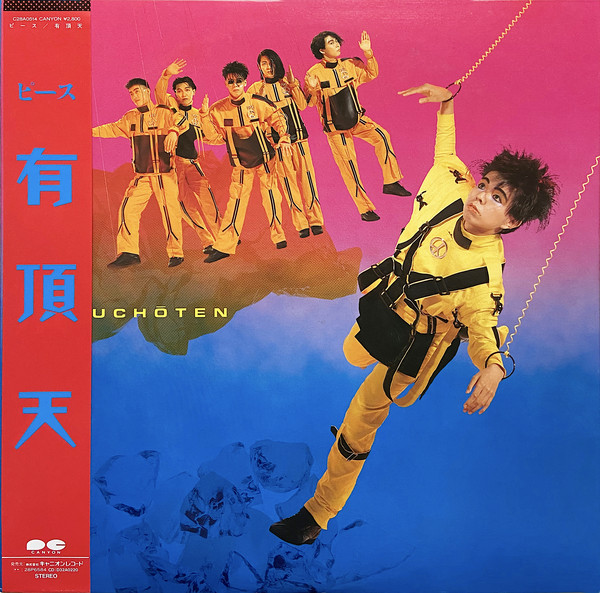 Take a look at that cover man. Just some dudes in bright yellow and black suits doing stagnant robotic?, yet cool poses. To be fair, the other suits are orange, but the image makes it look like a similar hue. My mistake. Kera (full names: Kazumi Kobayashi and Keralino Sandrovich, I'm just gonna refer to him by his stage name atm), the lead vocalist for the group, is held up by what looks to be two yellow coiling bungee cords (??) by his wrists. There are also silver peace signs on each suit. The blue and bright pink contrasts well to the aforementioned bungee suits.

This cover certainly sets the scene for what you're getting into, but I cant quite explain it. Dudes posing awkwardly and a man puppeted by spiraling, yellow chords he stares into the distance sells it. Bands like Uchoten are what I'd like to call 'controlled chaos', meaning that their music can be somewhat "abbrassive", I guess, whether that be vocally or instrumentally. This controlled chaos is certainly still listenable, heck enjoyable. Such good stuff!!! The first track, Bye-Bye, doesn't really fit this description for the album, but it's still a good tune. Kera's vocals are intriguing and fitting to the accompaniment surrounding him not just here but for the entirety of 'Peace'.


Of course, 'Bye-Bye' leads into Futura. Futura starts with those 4 hihats and gets straight to the chaos I keep mentioning. Those discordant guitars supply themselves well to Kera's near-screaming vocals, with another member using a low, kinda of gruff voice before Kera sings (this could be Kera judging by his range but I wouldnt know ofc). This section leads into a huge "どうもありがとう！" from Kera, later turning into a small crowd shouting it back, chanting "Peace Peace Peace!" etc. This track also ends with Kera basically saying "It's over", and, later on, this trend continues. Cool intro jam all around.


OH ohohohoh ok oops I have to mention those weird noises that pop up during the album. I don't know what they are or how they were made, but they sound good. It's just a satisfying sound. It's a bit mechanical and gear-esque. One of my favorite uses of this noise is probably at the very end of 'Koro Koro Mushi' where the sound plays a couple times normally, and then this hard drum kicks in for a bit, then stops. It sounds like a new song is about to begin playing, but it stops right where the intro mightve begun.


The lyrics are catchy and especially so when Kera is supplying those warbly, varied vocals for each track. Overall, this is such a banging album and I've have ToMoGuI stuck in my head all month long. I think this is one of those kinds of bands that you just have to jump right in and listen to. Its hard to describe since their music gets so ambiguous throughout 'Peace'.


The funny thing is that this band REUNITED. and they still play. They're all like, old men now. They still have the same spiky, wild, punkish hairstyles and everything. They still wear the same yellow and black attire that they wore way back in the 80s. It's wild. I've listened to their first full LP, Dohyou Ouji, the first two tracks of AISSLE, and the first four tracks of their most recent album, Kafka's Rock/Nietzche's Pop. Dohyou Ouji was as good as this album was served as a good intro to Uchoten's work. I was not expecting a full of scene of dialogue at the beginning, but it really contrasted to the other tones of the LP. Check it out if you have the time, the full thing is on YouTube. KR/NP seems to be cool so far. I'm surprised they still have such a similar sound to their earlier work despite new technology and whatnot!

Wow. I'm surprised I haven't posted an entry on here yet. I really need to catch up on my website-making duties STAT. 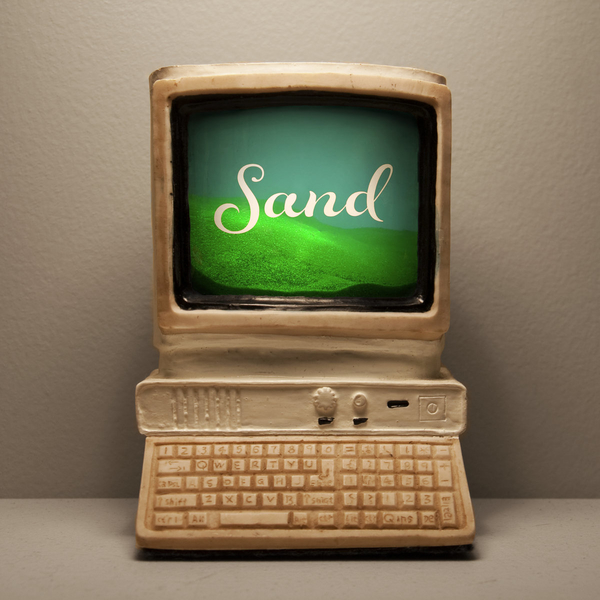 During the beginning of 2021, January to be specific, a mutual of mine (shoutout to jay!) retweeted an album release announcement. I was intrigued by the cover right away, as my love for 90s-esque computers was being tested yet again. The cover depicts a faux-windows computer, with its own Bliss Windows XP wallpaper. Overlayed on top of the aforementioned wallpaper was the title of the album: "Sand". As the bandcamp description explains: "No one tells the truth anymore. It's all sand." I was curious to see what this album and it's 16 respective melodies entailed. Boy was I in for a ride.


There are so many unique, quirky (and i mean that in the good way), zany, and curious little bursts of music and instrumentation throughout each track. You can definitely tell that there was a whole lot of love put behind each key, note, and strum. The beginning track, "The Ultimatum", is a great example of this. I especially adore this verse:


As one may see throughout each song, OK GLASS is a lyrical expert, so to speak. Every word uttered in this album feels crisp and just right. Like if Goldilocks herself were to listen to this album, she would thank Baby Bear for listening to these sweet tunes in the first place (before promptly getting kicked out of the bears' house). These tracks capture the essence of pure curiosity in a way I can't necessarily describe properly. "Calico" is one of my favorites on the album, which tells the tale of a person who wants to be a calico. However, the lyrics do not really indicate that the person wants to be the breed of cat we have all come to know and love. In fact, some of the lyrics describe an automated, robotic like being who has predetermined limits and outcomes. Sorry folks, you're not going to see any cat people any time soon. OK GLASS's vocals definitely elevate the tone and expression of the tracks themselves. Using forte and piano, along with crescendo and decrescendo, in their proper places, at a time when you least expect it. Many of the tracks have moments of swelling, (and for the folks who dont sing, don't worry, OK GLASS does not have any injuries, he just uses an increase in volume to improve the song as a whole) which really bring a few of these tracks together. Something about the instruments used in OK GLASS's songs feels humble, like if you picked up the instrument and practiced it for long enough, you could play along too. Not in an orchestral, triumphant manner, but rather in a communal, homey kind of way.


I was pleasantly surprised to see that OK GLASS was influenced by the likes of Lemon Demon and TMBG, two bands I listen to frequently (I sincerely need to catch up with TMBG as I am WAAAAAY behind on my giants lore, if that is a thing). It feels good to put the metaphorical puzzle pieces together while listening. Being able to pinpoint moments of influence rocked. It is definitely inspired, but not too derivative. If you have ever had one of those mini Dove chocolates which come in little blue wrappers with ~inspirational~ quotes on the bottom, you now know what this album would taste like. Good for you. I make this comparison because those chocolates became a bit too addicting for me. I wanted to take another bite once I got a first taste of what I was in for. I think im losing my marbles a bit here.

Overall, please check out this album if you are a fan of catchy or moving songs with exquisite lyrics. If you are a fan of the weird, yet cohesive, this album has laid out a "Welcome Home" mat just for you. Side note, thanks to OK GLASS for being a great person and cool mutual. Check out his twitter for heaps and heaps of posts about corporate power points, or if you just want to take a peek into his music-making process. Goodbye for now y'all :-)